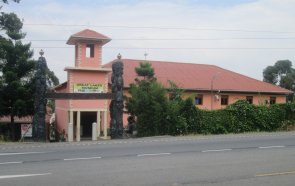 With a pledge of "preserving history for our future", the Great Lakes Museum can be found on the Ntungamo to Kabale road on Rwahi Hill just south-west of Rushenyi on the main road. Opened in January 2014, the museum continues to develop and aims to preserve and promote the history and local technology of the Bakiga, Banyankole, Banywaranda and Baziba people for both future generations and to promote tourism to the area. Now the overall experience is a good one but the actual museum element is a bit bizarre. Sure, it does have the "old household items such as cooking utensils, sleeping mats, musical instruments, hunting equipment and fighting gear used in past battles" as advertised but they are interspersed with modern day bikes that could have been bought last week and pictures on the wall of people like Justin Bieber. Some items though, such as the wooden bike and older hospital stretcher, are definitely worth seeing. Other showcases though are empty. It's as if they had a great idea and put the museum together before identifying whether they realistically had enough items to fill it. That of course could change but additional acquisitions need money and its fair to say that most Ugandans don't tend to visit museums to generate that money.

The Great Lakes Museum states "It is hoped this collection can be developed to complement the range of other facilities at the museum from traditional dancing and drama, guided walks, mountain biking, camping and workshops alongside modern eco-friendly cottages for accommodation, camping facilities, children's playground, conference centre and a well stocked bar, restaurant and cafe with high speed internet access." And they state further "the Great Lakes Museum together with the Igongo Cultural Centre are the two museums within Western Uganda where you can learn all about the region's rich heritage. Both provide fascinating insights into local and regional history together with artefacts from the past." 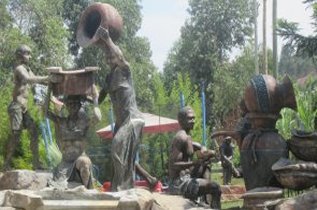 Mm, well it certainly needs to up its game. But, and there is a big but, there are some simply awesome sculptures within the complex itself created by a local sculptor and they are just breathtaking and make a visit to the centre worthwhile in its own right. Many of these can be seen in the picture show above but they really need to be seen in person to fully appreciate them. Throw in good food at the restaurant and a well stocked craft shop, friendly and welcoming staff and it's a worthy half-day out. As with so many Ugandan tourist attractions, there are different rates for entry to the actual museum section of the site (which is effectively one large room) for locals and foreign nationals but we're only taking a few pounds in total here. If they had put the outside sculptures inside and thrown most of the inside out it would be excellent value for money!

The Great Lakes Museum is on a stretch of road in the middle of no-where however it can be reached within an hour either from Kabale or Ntungamo for around 25UK in a "special" cab or a pound or so by taxicab. We've passed the museum many times but this is the first time we've actually visited and glad that we did. Did we mention the free wi-fi? No? Well that's an added bonus. Not very old granted, but maybe in a hundreds years or so the current population of the Great Lakes will wonder at the old technology!