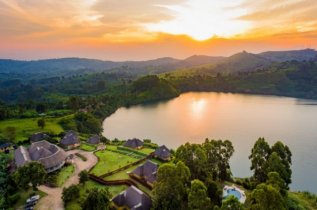 296 sq miles in size, Kibale National Park is considered one of the most beautiful in Uganda with terrain ranging from tropical forests to sweeping savannahs and woodlands on the Rift Valley floor. Located some 200 miles west of Kampala, the park was designated in 1993 and is home to around seventy mammal species as well as 375 species of birds including include the White-spotted Flufftail, Yellow-spotted Barbet, Hairy-breasted Barbet, Yellow-billed Barbet, Western Nicator, Grey-winged Robin-chat, White-tailed Ant-thrush, Brown-backed Scrub-robin, Black-and-white Shrike-flycatcher, Brown-throated Wattle-eye, Superb Sunbird, Brown-crowned Tchagra, Bocage’s Bush-shrike, Black Bishop, White-breasted Negrofinch and Black-crowned Waxbill among others.

One of the park's main attractions though, is its chimpanzee tracking experience along the Kanyanchu Primate Walk where 13 species of chimpanzees can be seen going about their daily routines. The people living in and around Kibale National Park are mostly Batoro and Bakiga with the Batoro being native to the area later joined by incoming Bakiga from south-western Uganda. The park is divided into seven zones for management purposes: research, natural reserve, civic-cultural, recreation, harvest, community and protection with an emphasis on conservation. 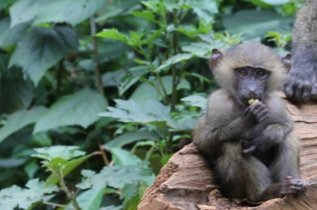 There are many places to stay in the park and accommodation including safari lodges which though sometimes expensive help you make the most of your stay rather than travelling in each day from town such as Fort Portal over 20 miles away to its north. There are also camping opportunities at Kanyanchu River Camp and the Kibale Forest Camp. The park is open through-out the year, Monday to Saturday 7.30am til 7.30pm (daylight hours) however navigating the park during rainy season can be difficult even when travelling using a four by four. Travellers will be aware that usual seasons are changing in Uganda however generally December to April is hot and dry, April to June sees a rainy season, July through to September is again dry before heavy rains return in October and November. Contact the park on ++256 483 444629 or through the official website at www.kibaleforestnationalpark.com/.

If you have further information about the Kibale National Park whether it be places of interest or accommodation contact us using our contact form. Now check out the main tourist attractions in the park in the video below.