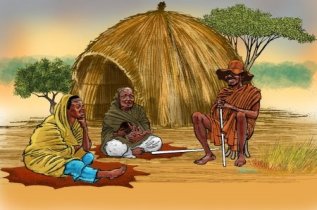 Mbarara, just as the Ankole Kingdom itself got its name from the colonial mispronunciation of ancient kingdom of "Nkore", also gained its name from the colonial mispronunciation of the local word "[E]mburara" which is a tall green grass favoured by the local cows. Indeed, archaeological remains unearthed at Bigo bya Mugenyi, the capital of the Bachwezi empire and at Ntusi located in the present day Mubende District of Uganda, reveal an urban centre indicative of a highly organized society under the Backwezi kings. The history of the Bachwezi themselves provides some insight into how legend, myth, fact and fantasy intertwined to create a history of the area. Those familiar with east African history will know the story of Ruhanga, the creator. He had a son, Isaza, who fell in love with the banished daughter of Bukuku, a tyrant who had seized the earthly throne and kingdom of Bunyoro after Ruhanga had left the Earth and re-ascended to heaven. Isaza and Nyinamwiru married in secret and had a son, Ndahura.

In years to come Ndahura escaped many attempts by his grandfather Bukuku to kill him, fearing his legitimate claim to the Bachwezi throne being the grandson on his father's side of Ruhanga himself. Eventually, Ndahura, as a young man, killed Bukuku and claimed the throne. His kingship was welcomed by his new people and he went on to expand the kingdom across all of modern day southern Uganda, western Kenya, Rwanda, Burundi, parts of northern Tanzania and eastern Congo. Following his abdication, the kingdom was later ruled by Wamara however it was ravaged by disease forcing the population to migrate in search of food and sustenance and Wamara, along with his ailing kingdom, faded from history. With the area now sparsely populated and weakened with no functioning economy, the Babiito dynasty emerged as its new rulers having moved into the area from Ethiopia possibly through Sudan establishing Mpuga Rukidi I as the first king of the Bunyoro-Kitara kingdom around the 14th century.

Around this time the Kingdom of Kaaro-Karungi also emerged ruled by the Bahinda Abagabe (king), descendants of Wamara, former king of the Bachwezi. Bunyoro began to decline in the late eighteenth century due to internal divisions and Buganda seized the Kooki and Buddu regions from Bunyoro at the end of the century and in the 1830s the large province of Toro also separated. To the south, Rwanda and Nkore were both growing in power, taking over some of the smaller kingdoms that had previously been subject to Bunyoro rule. The Nkore Kingdom itself had remained small until when its Abagabe took advantage of this decline of the Bunyoro kingdom and the break-up of the Mpororo Kingdom after 1752 following a family feud. The then Nkore king or Omugabe, Rugingiza Ntare V, set about extending his rule to the north and west with the neighbouring kingdoms of Buhweju, Igara and Buzimba recognising the newly resurgent Nkore kingdom as their overlord whilst the rulers of Kitagwenda and Bwera similarly appeased him. However the kingdom was later abolished under President Obote's republican constitution and [Sir Charles Godfrey] Gasyonga II (above) became it's last independent ruler. 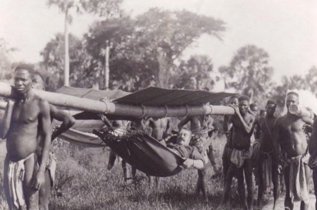 By the end of the nineteenth century the British were making inroads into what is present day Uganda. They opened an administrative station in Mbarara in 1898 and set about governing the area through local chiefs rather than directly. As such, the Buchunku (Mitooma), Matsiko (Nyabushozi), Rutasharara (Isingiro), Ruhara (Rwampara), Nduru (Buzimba), Enganzi Mbaguta (Ngarama, Sheema, Kashaari), Mukotani (Igara), Rubarema (Buhweju), and Kaihura (Bunyaruguru) were all deemed under Nkore rule, whether they accepted it or not, and this was formalised under the Ankole Agreement of 1901, with the word Ankole being mistaken for "Nkore", by which the Kingdom of Nkore was incorporated into the British protectorate of Uganda.

The Ankole Agreement saw the founding of the Ankole District and in 1904 one Harry George Galt, sometimes called Harry St. George Galt, a British officer, was appointed as the Sub Commissioner of the Western Province of Uganda to adminster the region on behalf of the British government. Having first worked as the tax collector for the Ankole sub-region, Galt was considered a cruel officer who treated those he administered harshly. For example, on 19 May 1905, he forced the local people to carry him (above) from Fort Portal to Ibanda, refusing to let them rest. Such cruelty could not be tolerated as Galt found out some two miles from Ibanda when a native man named Rutaraka threw a spear at his chest and he died shortly afterwards aged 33 yrs. (Galt now has a street named after him in Mbarara, Galt Road which starts on Stanley Road on Booma Hill opposite the Public Library.) 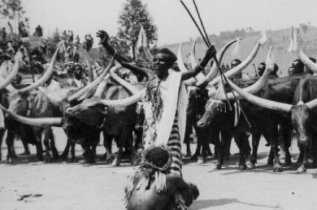 By 1957 Mbarara, the main town of Ankole District, became a township and after Ugandan Independence in 1962 the Ankole federal and kingdom government was abolished in 1967. Then, following the Coup of 1972, the name Ankole District was changed to Mbarara District, and the township was transformed into a municipality in 1974, albeit in increasingly reduced size. The previous year in 1973, Bushenyi District had already been created out of Mbarara and in 1995 Ntungamo District was also created and more latterly in 2002, the sub-county of Itojo, formerly part of Mbarara, was added to Ntungamo District. In 2005, the boundary was significantly reduced further and the district was split into three other district Local Governments namely, Isingiro (comprised of Bukanga and Isingiro counties), Kiruhura (comprised of Nyabushozi and Kazo counties) and Ibanda (comprised of Ibanda County). In 2020 Mbarara finally achieved much sought after city status. 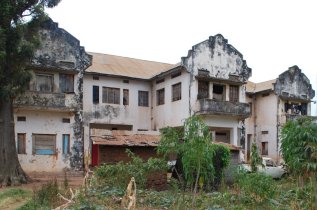 Unlike other pre-colonial kingdoms, Ankore was never restored under the Traditional Rulers (Restitution of Assets and Properties) Statute of 1993. The former royal palace (above) has since fallen into disrepair, not least because Anokle itself had never really existed as a kingdom in its own right, being a colonial amalgamation of a number of other, smaller kingdoms as well as Nkore itself.

Rulers of the Nkore (Ankole ) Kingdom 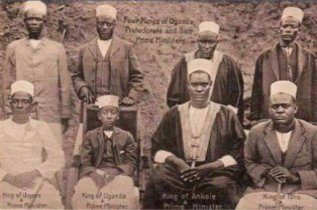