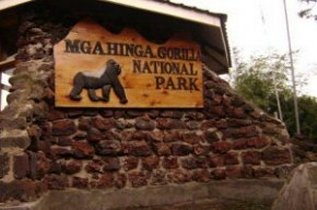 The most southern of the National Parks in Uganda and stretching into Rwanda, the Mgahinga Gorilla National Park (taking its name from "Gahinga" - a local word for volcanic stones) is also the smallest National Park in Uganda but one of the most popular as it is home to mountain gorillas and golden monkey. Sitting high in the clouds and surrounded by dense forest Mgahinga Gorilla National Park is also home the indigenous Batwa pygmy people who live dominated by three extinct volcanoes that form part of the Virunga Mountains that straddle the borders of Rwanda, the Democratic Republic of the Congo and Uganda.

Most visitors to the park come in search of gorillas with the park being only one of two in Uganda (the other being Bwindi ~ see below) where they can be found. There are just 400 gorillas left in Uganda however visitors are almost guaranteed to see this endangered species when undertaking a trek from the Ntebeko entrance gate to the park. This entrance is also home to the Ntebeko Visitors’ Centre which includes exhibits relating to the life around the Virunga Mountains.

When visiting Mgahinga Gorilla National Park take time to check out Garama Cave which can be found close to the park's headquarters. This is a sacred place for the Batwa and is one of many caves in the park created by lava tubes when the volcanoes were active and keep an eye out for the 42-60 Golden Monkeys that live in the park which can be seen high in the dense bamboo forests on the Gahinga trail. There are many lodges to stay at in the park and its best to travel and stay there before going gorilla trekking as the treks start after breakfast at 8am and those who know Western Uganda will understand that the road system isn't always reliable so if travelling in on the day you could easily lose your slot and money!