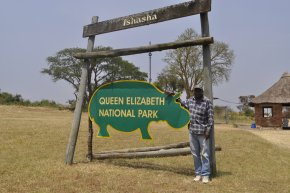 Most travelling to Western Uganda will treat themselves to a once-in-a-lifetime safari at Queen Elizabeth National Park. Once-in-a-lifetime because so many safari tours keep you cooped up in a small minivan allowing you to take turns to pop your head through the skylight taking photos through the windows however with many Queen Elizabeth National Park safaris you get to sit on top of a jeep as you travel through the park, capturing stunning photographs such as those in our slideshow (right). Queen Elizabeth National Park is the most popular destination in Uganda for those looking for a safari not least because of its diversity stretching from the Rwenzori mountains that straddle the border with neighbouring Democratic Republic of Congo to the shores of Lake Edward taking in forest, savannah and wetlands along the way.

Queen Elizabeth National Park was recognised on 31st March 1952 (then known as Kazinga National Park until a visit by Queen Elizabeth in 1954) by the National Park Ordinance in order to prevent unregulated hunting by both Africans and Europeans and today is home to buffalo, elephants, lions, leopards, hyenas antelopes and so much more, in fact 95 mammal species. Oh, and those lions are the tree climbing variety, not found much outside Uganda! It also has over 600 bird species, the largest bird population of any protected area in Africa including the African skimmer, Chapins flycatcher, Pink-backed pelicans, Papyrus canary, Shoebill stork, martial eagle, black-rumped buttonquail as well as the great flamingos.

When undertaking Queen Elizabeth safaris we recommend you indulge in a boat ride along the Kazinga channel, a man made waterway that connects Lake George to Lake Edward from where you will get a great view of most of the mammals that inhabit the park, close up (but very safe!) as the shores of the channel are heavily populated by the park's mammals as well as reptiles such as crocodiles. There are many different safari tour operators in Queen Elizabeth and a number of accommodation options to suit every budget. Walks, camping, and much more is available in the park as well as including in local culture for those undertaking a longer safari.