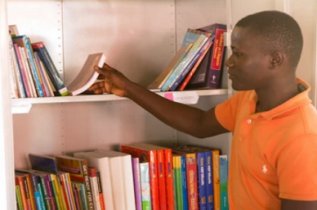 English is a national language in Uganda and is sometimes referred to as Uglish. Many will speak English as a second language and its useful for native English speakers to have some grasp of the nuances of how English is deployed in Uganda. Visitors will also be surprised at how vague communications can be. For example, ask someone where someone lives and the reply will probably be "over there" with an arc being gestured that would cover a vast proportion of the earth's surface. Similarly if there is a crowd outside a building and you enquire as to why, the reply may well be "because they are busy" ! Some words in Uganda also have different meanings.

A taxi in Uganda is a small seater bus, whilst a single use taxi ie with no other passengers is "special hire" ~ both are driven by a "pilot". Motorbikes which are used for paid transport are called "boda bodas" and can be bicycles whilst walking is "footing" as in "I footed it to the shops". "Please" and "thank-you" are not a natural part of Ugandan speech, rather politeness is inferred by the manner of asking or saying. So for example, whilst an English visitor might expect someone to say "please may I have", a Ugandan would just say "you give me". It sounds rude but its just as polite locally as saying "please". Similarly the words "thank-you" are not often expressed, just the look on someone's face shows the appreciation.

As such, if you insist a child says please or thank-you they will look puzzled as they believe they have already covered that! It's worth noting that its common place for Ugandans to ask for something and no offence will be take with a "no" response. It can be a bit wearing but that's the culture and you are the visitor. Similarly other expressions may seem abrupt but they are not. "We go" means "lets us go"; "Demand" means "owe"; "First wait" means "let me finish what I'm doing first" etc. Hotels in Uganda are actually bars that serve food rather than residential accommodation, a "brother cousin" is a close relative; farming is called "digging" and cultivated land/farms are often referred to as "gardens" whatever their size; a "short call" means going to the toilet; you don't ask for change having paid for something you ask for the "balance"; "Lost" often means you haven't seen someone for a long time and "means" refers to method of transport. So if you could not catch a bus you had "no means" of getting somewhere. Whilst English words are often used in a different context in Uganda, many younger people are also using text speak just like many across the world which is degrading the language.

It is also worth remembering African time operates at a different pace than western time. You may be familiar with the Spanish word "mañana" meaning tomorrow. Well there is no word in Uganda to get things done that quickly! You could arrange to meet someone for lunch at 1pm and at 2.30pm ring them to find out where they are. They may reply "I'm on the way" "I'm reaching" or even "I've reached" only for another hour to pass before they actually join you! And then when you finally order your meal it may take an hour to actually cook it! People will simply smile and explain they are on "African time" a concept built less around tasks and activity, rather relationships.