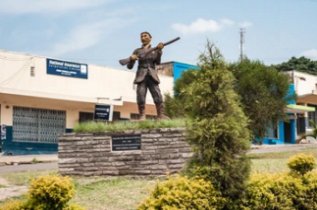 Fort Portal is just under 200 miles from Uganda's capital Kampala and has a population of some 42,670 (2021). Fort Portal is named after Sir Gerald Herbert Portal who was appointed as British Special Commissioner to East Africa in 1892 and visited Uganda to establish whether the area should become a British Protectorate to replace the failing Imperial British East Africa Company. His recommendation that it should become a protectorate was accepted by the British Government however he died at the age of 36yrs old, six months before his recommendation became a reality on 18th June 1894. His statue still stands in the town centre (above).

There is much to see and do when out and about in Fort Portal from a vibrant nightlife with town centre clubs such as Africana and the Forest Bar and daily markets around the area. Most however will want to take in Fort Portal's tourist attractions which range from caves and waterfalls to Royal Palaces (with Fort Portal being the home of the traditional Tooro Kingdom) and tombs to its tea plantations and guided walks that take in crater lakes with their bubbling sources. There is good accommodation in and about Fort Portal from which you can use as a base for trips and adventures to Queen Elizabeth National Park, the Bigodi Wetland Sanctuary and the Kibale forest. Food is plentiful both for those who prefer traditional African food and those who would rather have international cuisine with the Dutchess hotel and restaurant close to the centre of town offering pizzas, burgers etc.

On these pages we hope to provide all you need to know about Fort Portal however if you know of other tourist attractions in Fort Portal get in touch and let us know using our contact form to update our travel guide.