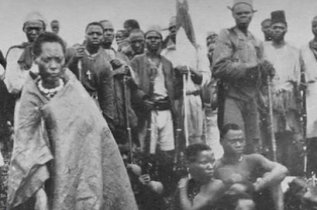 Through-out this period there was ongoing resistance to colonial rule, even if that rule was largely administered by local chiefs and kings rather than directly such as in neighbouring Kenya. At the heart of this movement known as the Nyabingi Resistance (1910 ~ 1930), two figures stand out; Ntokibiri, a former Belgian colonial army deserter who left with other Africans with many weapons, and Ndungutse, a prince of Rwanda’s Banyiginya dynasty who had fled to the area after plotting a coup attempt in Rwanda that proved unsuccessful. Ntokibiri carried out guerrilla attacks against the Belgians and British; his tactics described by local British military leader Maj. Lawrence as “a master of the situation, there were no roads, very hilly country, look out huts and signal fires on every hill and every native as far as lay in his power apparently under [Ntokibiri]’s control-none of whom we could touch”. However Ntokibiri was shot dead on 21st June 1919 and two of his men executed by public hanging in Kabale six months later to act as a warning to other insurgents. The fate of the other resistance leader, Ndungutse, remains unclear, though he was certainly dead by 1930 when the last of the resistance against colonial rule had largely dissipated.

As an aside, the Nyabingi Resistance was named after the Nyabingi cult which is first recorded in 1891 named after the mythical Queen Nyavingi who was so mysterious she had apparently never been seen by anyone, even her own subjects only communicating through a screen of "bark cloth." Her legend was so beguiling and of use to those who sought to control their fellow men that supernatural powers were attributed to her, although these powers didn't prevent her from being captured by the British in 1913. However her legend continued (and indeed continues) that her spirit periodically possesses the bodies of other woman from the area. Also called Queen Muhmusa or Tahtahme (above), it is also said that she later inspired the Nyabinghi underpinnings of Rastafarianism having abandoned Uganda for good preferring Jamaica!

This legend is important in terms of the history of the area as a British officer in Kigezi had concluded in a letter to the Chief Secretary for Uganda on 6th September 1911 that the Nyabingi cult was "entirely subversive to all authority, whether local or European". As such, meaningful attempts to impose colonial rule proved fruitless. To provide some semblance of authority the British decided to appoint agents from the Buganda Kingdom to govern the area on their behalf and named their first Kiga chief in Kigezi in 1922. To say this was an inept appointment is perhaps an understatement given that the new chief's only qualification was that he wasn't British but a black local with no experience of running anything. In fact, his highest position to date had been as an office boy in the District Commissioner's headquarters. By the 1930 missionaries were abundant in the area having first been visited by the Catholic missionary, Yowana Kitagana in 1911, spreading Christianity. However there were ongoing superstitions that some of those who were converted to Christianity were later possessed by the spirit of Nyabingi, fermenting a low level but none-the-less very real simmering of discontent with the British. In 1932 Kabale became a township with an administration invested in a township authority overseen by the Protectorate Governor. 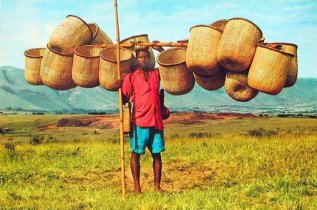 In 1958 the Town Authority became a town board and then a town council with ten councillors in 1962, the year of Ugandan independence. Within two years, the "Rutakirwa Engabo ya Kigezi" (the shield of Kigezi) was elected as the constitutional head of the District however this position was later vacated under President Obote's constitutional changes of 1966 due to Article 118(1) of the new law, which stated: "The institution of King or Ruler of a Kingdom or Constitutional Head of a District, by whatever name called, existing immediately before the commencement of this Constitution under the law then in force, is hereby abolished." In 1985 Kabale was granted the status of a municipal council and later district in addition to its town status forming one District of the Kigezi sub-region of Western Uganda a which also comprises Kanungu, Kisoro and Rukungiri Districts. Today the town has a population of some 46,000 people and is seen as a gateway to tourism in the area as well as a staging post to Rwanda, DRC and beyond.